This program triggers to execute configured tasks on nodes in Consul Cluster. And tasks will be executed in propagative way.
Task propagation time takes O(log N) in theory; as N means node number in cluster.

So this tool can shorten the time of tasks which take O(N) time in system of large number of nodes.
Typical usecase is software deployment.

The name fireap comes from "fire" and "reap".

Here is a benchmark result comparing fireap against GNU Parallel.

The job executed here is a directory sync operation by rsync command which contains a thousand of files up to total 12MB size through 100 t2.micron instances on AWS EC2.

Concurrency numbers of both GNU Parallel and fireap is 5 in this benchmark.

In fireap, the word "concurrency" means the maximum concurrent number that one node can be "pulled" by other nodes.
You will grasp the concept by going under part of this document.

Consul is a tool for service discovery and infrastructure automation developed and produced by HashiCorp.

Take a look at how it works

Below is a demo of fireap task propagation at a 10-node Consul cluster.

On the top of the screen, fireap monitor command is executed. This continuously shows the application version and updated information of nodes those are stored in Consul Kv.

On the bottom of the screen, fireap fire command is executed which fires Consul Event. The triggered event is broadcasted to cluster members at once.
And it leads cluster members to execute fireap reap command by Consul Watch mechanism.

Eventually, configured tasks are executed on nodes in the cluster.

The image below illustrates task propagation procedure by fireap in Consul cluster. 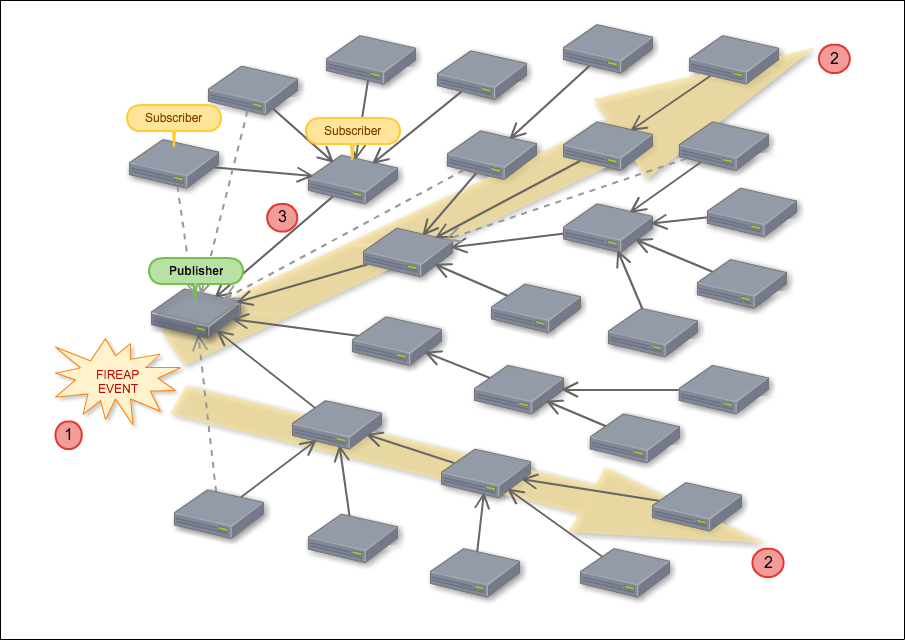 One leader node fires Consul events whose Name is FIREAP:TASK. And it is assumed to be the 1st node in the cluster which finishes the task.
All other nodes are followers who receive events and execute tasks.

This propagation way looks like tree branching.
But it is rather robust because even if a follower happens to fail the task, the failure does not affect others.

Leader and followers store information in Consul Kv about task completion and so on.
All keys of data related to this program begin with prefix fireap/.

How to get started?