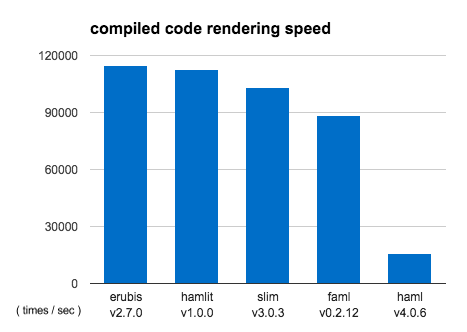 This benchmark is the same as slim-template/slim's one for fairness. (The result on travis CI)

haml/haml-spec is a basic suite of tests for Haml interpreters. For all test cases in haml-spec, Hamlit behaves the same as Haml (ugly and escape_html mode only, which is used on production).

Basically the same as haml. Check out the reference documentation for details.

Update Gemfile. Html escaping is enabled by default. If you want to disable it, add following code.

Haml's rendering is very slow because generated code by haml runs many operations on runtime. For example, Haml::Util is extended on view, attribute rendering runs even if it is a static value and the values in attribute is sorted. All of them is achieved on runtime.

Hamlit extends ActionView beforehand, attribute rendering is done when compiled if it is a static hash and no unnecessary operation is done on runtime.

Hamlit is implemented with temple, which is a template engine framework for Ruby. Temple has some great optimizers for generated code. Thus generated code by Hamlit is very fast.

Not only relying on temple optimizers, but also Hamlit's compiler cares about many cases to optimize performance such as string interpolation.