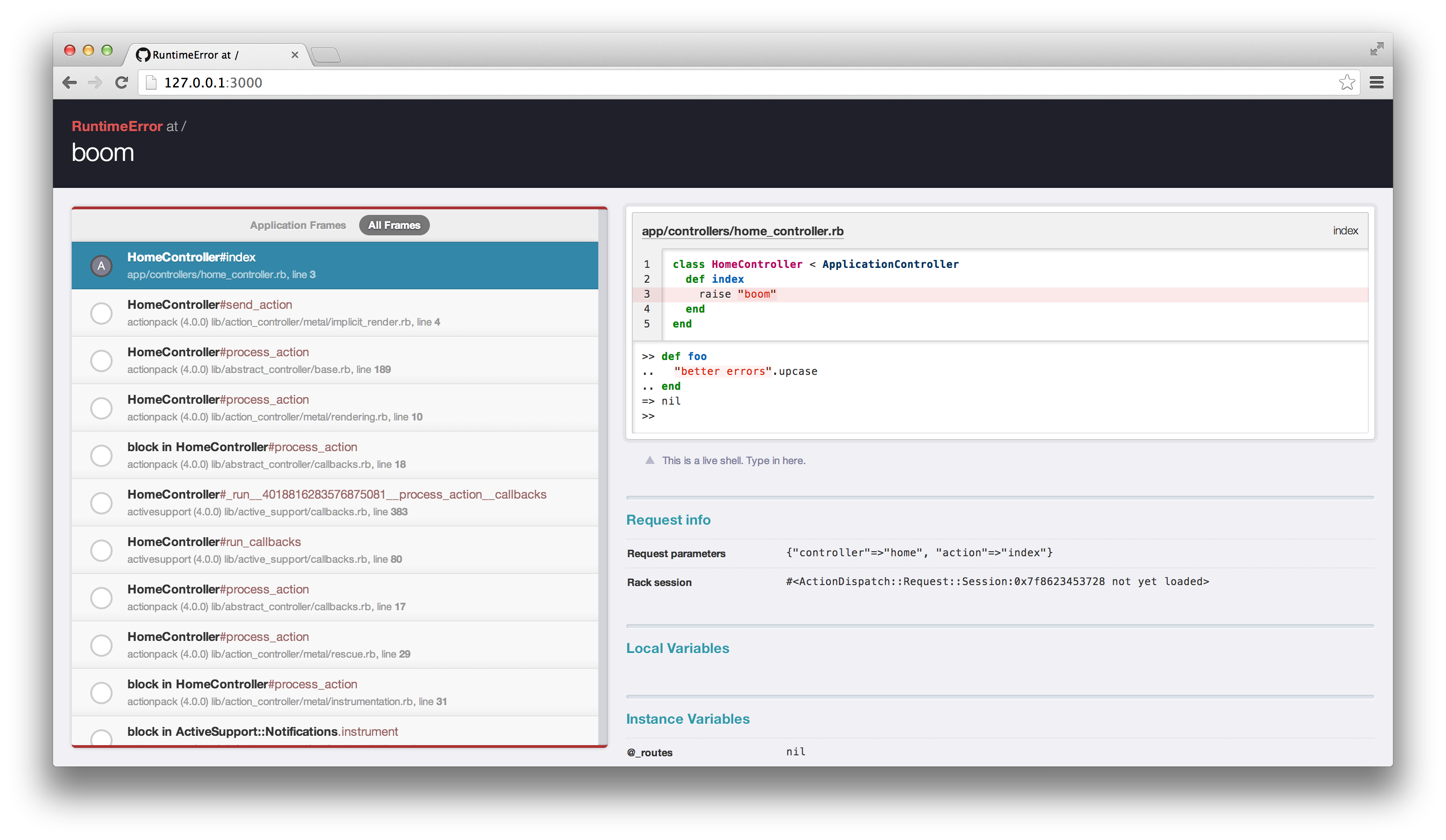 For screenshots of these features, see the wiki.

Note: If you discover that Better Errors isn't working - particularly after upgrading from version 0.5.0 or less - be sure to set config.consider_all_requests_local = true in config/environments/development.rb.

By default the links will open TextMate-protocol links.

To see if your editor is supported or to set up a different editor, see the wiki.

If your application is running inside of an iframe, or if you have a Content Security Policy that disallows links to other protocols, the editor links will not work.

To work around this set BETTER_ERRORS_INSIDE_FRAME=1 in the environment, and the links will include target=_blank, allowing the link to open regardless of the policy.

This works because it opens the editor from a new browser tab, escaping from the restrictions of your site. Unfortunately it leaves behind an empty tab each time, so only use this if needed.

NOTE: It is critical you put better_errors only in the development section of your Gemfile. Do NOT run better_errors in production, or on Internet-facing hosts.

You will notice that the only machine that gets the Better Errors page is localhost, which means you get the default error page if you are developing on a remote host (or a virtually remote host, such as a Vagrant box). Obviously, the REPL is not something you want to expose to the public, and there may be sensitive information available in the backtrace.

For more information on how to configure access, see the wiki.

For instructions for your specific middleware, see the wiki.

Better Errors will render a plain text error page when the request is an XMLHttpRequest or when the Accept header does not include 'html'.

Unicorn, Puma, and other multi-worker servers

Better Errors works by leaving a lot of context in server process memory. If you're using a web server that runs multiple "workers" it's likely that a second request (as happens when you click on a stack frame) will hit a different worker. That worker won't have the necessary context in memory, and you'll see a Session Expired message.

If this is the case for you, consider turning the number of workers to one (1) in development. Another option would be to use Webrick, Mongrel, Thin, or another single-process server as your rails server, when you are trying to troubleshoot an issue in development.

Changing the link to your editor

Better Errors includes a link to your editor for the file and line of code that is being shown. By default, it uses your environment to determine which editor should be opened. See the wiki for instructions on configuring the editor.

After checking out the repo, run bundle install to install the basic dependencies.

You can run the tests with the simplest set of dependencies using:

To run specs for each of the dependency combinations, run:

You can run specs for a specific dependency combination using:

On CI, the specs are run against each gemfile on each supported version of Ruby.